Join us in this 8 Day tour to visit the Iconic Imperial Cities of Morocco such as Fes, Meknes and Marrakesh and Morocco’s largest city, Casablanca.

On your arrival at the airport, you will be met by your driver and tour guide and then drive directly to the Iconic Imperial City of Fes.

Fes is known as the spiritual and cultural capital of the country as well as a center for handicraft arts.

On your arrival, you will be taken to your hotel or riad.  After some rest, enjoy your first dinner in Morocco and then an overnight stay at your hotel.

After breakfast, begin your Fes sightseeing tour from Fès el-Jdid to continue the Iconic Imperial Cities of Morocco.

Visit the historical sites such as the Royal Palace, one of the oldest and largest in Morocco, the Mellah or Jewish Quarter, dating from 1438, and the landmark Marinid Tombs which also offer an extensive lookout over the Old City.

Later, you will enter the winding, old walled city of Fes el Bali, designated a UNESCO World Heritage Site in 1981.

Here you will visit the magnificent Moulay Idriss Mausoleum and the medieval University of Karaouiyne plus the leather tanneries which have been in use for 1000 years.

Return to your hotel or riad and have dinner at a restaurant of your choice in the city.

After breakfast, drive to Volubilis, which is one of the best-preserved excavations in Northern Africa dating from the Roman Empire, and is also a UNESCO World Heritage Site.

This archeological site provides you an opportunity to explore an ancient Roman and Berber city which has been partially excavated.  Some of the townhouses and old mosaic floors have survived.

Then drive to the charming whitewashed city of Moulay Idriss which is considered the holiest city in Morocco.

It was here that Moulay Idriss 1 arrived in 789, bringing with him the religion of Islam and starting a new dynasty.

Then head to Meknes, another UNESCO World Heritage Site, and visit the Mausoleum of Moulay Ismail, the Bab Mansour Gate, the Bab Berdieyinne Mosque and more.

At the end of the day, relax with a Turkish bath (Hamman) and massage.

Return to your hotel for dinner and overnight stay.

After breakfast, drive to the Imperial City of Marrakesh through the Berber villages and the Middle Atlas Mountains.

The road winds through the mountains and you will be able to stop for photos and enjoy the scenic views along the way.

Upon your arrival in Marrakesh, your driver will take you to your hotel or riad for dinner and overnight stay.

After breakfast, embark on a sightseeing tour of the city of Marrakesh, also known as the ‘Red City’.

The red color is pervasive as many buildings were constructed from local sandstone.

You will have an opportunity to explore a number of historical palaces, museums and sites in the city, such as The Walled Medina of Marrakesh, now a UNESCO World Heritage Site.

See the former palaces of the Sultan which have been rebuilt and restored and are rich in history and cultural heritage.

Enjoy all the festivities in the UNESCO World Heritage Site of Jemaa el Fnaa Square.

Visit the Majorelle Garden, an artist’s landscape, the Bahia Palace and more.

Return to your hotel or riad and have dinner at a restaurant of your choice.

After breakfast, depart for a day trip to Ourika Valley.  You will be in awe of the spectacular views of the small rocky hills, green mountains, and grazing sheep.

Enjoy lunch in the heart of Ourika Valley by the river before you head to see the waterfalls of Setti Fatma and observe the Berber lifestyle.

Return to your hotel for dinner and overnight stay.

After breakfast, you will take the highway to Casablanca, the largest and most progressive city in Morocco.

In the afternoon, after a rest in your hotel, you can explore the beachfront, also known as the Corniche.

Visit the Hassan II Mosque, the largest mosque in Morocco and one of the largest in the world.

Then enjoy a ‘Farewell to Morocco’ dinner at Rick’s Cafe, a Casablanca landmark.

After dinner, return to your hotel for a final overnight stay.

After breakfast, your driver will transfer you to the airport.

The tour includes the following sites:

For the price for 1 person or more than 2 people, please email us. 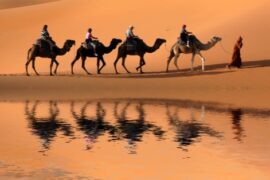 The Best of the South of Morocco 13 Days Luxury package

From Beach to Mountain to City by Train 8 Days

Historic Cities of Morocco on a First Class Train 9 Days